Video on clutch or brake first?


Should you press the clutch first before the brake when stopping or brake then clutch? This is a common question for new drivers. Have a look at the video below for some demonstrations to help you understand which pedal to press first. 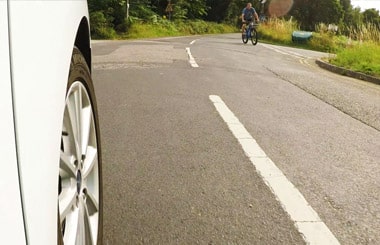 Which pedal first when stopping or slowing down?

It all depends on the speed you're driving and if you're going uphill.

You'll normally feel the car start to shake before it stalls. If you feel it shaking then press the clutch down quickly and you should save it from stalling.

But to prevent it from stalling in the first place you'd normally fully press the clutch down roughly two car lengths before you come to a complete stop.

I'm driving above 25mph in 3rd gear and I want to stop. The main priority because of the speed I'm driving is to slow down so I'll release the gas and now press the brake. Second priority is not to stall. Press the clutch down roughly 2 car lengths before stopping completely.

Another example. The speed limit is 40mph and I'm driving over 30mph.

Firstly I'll release the gas pedal and press the brake to slow down more. Press the clutch down about 2 car lengths before stopping to prevent it stalling. 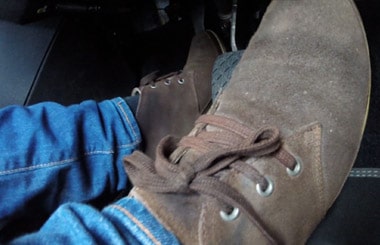 If you're driving slowly below 10mph and want to stop then press the clutch before the brake so that the car doesn't stall.

You're more likely to stall or have a shaky stop if you're driving slowly below 10mph and press the brake first then clutch.

You can also press both the clutch and brake at the same time when you're driving slowly if needed.

If you're driving uphill and want to stop then come off gas and let gravity slow you down, it's acting almost as a brake. Press the clutch about 2 car lengths before stopping and then brake.

Can't you just press the clutch before the brake every time?

Well then you could be coasting which is making the car freewheel and it could increase speed like this which means you'll have to brake more. You lose engine braking.

Driving faster, brake then clutch down.

Slowing down but not stopping?

If you just want to slow down and not stop then release the gas pedal and brake if needed but you won't need to press the clutch unless you have to change gear.