How to drive a manual car

Lesson 1: video on how to drive a manual car


To drive a manual car safely and in control takes time and experience.

This basic overview covers how to move off and stop.

After you can move onto the next module that covers how and when to change gear. Our other driving modules cover other aspects of driving including clutch control and hill starts.

Learn the theory behind these subjects here and save money on your driving lessons as your instructor won't have to explain every little detail. 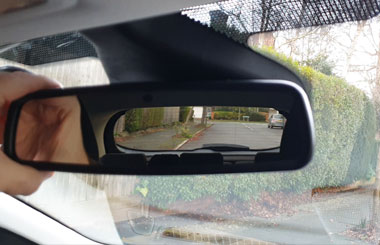 First things first, make sure the doors are closed, seat adjusted, seat belt on, steering wheel in the right position and mirrors adjusted.

There's three pedals on the floor. The one on the right is the accelerator, your instructor will probably call this the gas pedal as it's easier and quicker to say. Use your right foot for this one.

The foot brake is in the middle. Again use your right foot. You can position your right foot between these two pedals and pivot on your heel so you can find the pedals quickly and as they're sensitive, making sure you're not stamping on them.

The clutch pedal is on the left. Use your left foot for this one. You should be able to press the clutch all the way down without stretching but you also don't want to be too cramped up to it.

Have a look at the video above to see a demonstration of when and how to use these controls to get the car moving off.

For more information on how to adjust the seat, steering column and mirrors have a look at the link in the description. Before starting the car, for safety, make sure the car is in neutral. You can check by moving the gear lever left or right. It should feel springy. If it's in gear then it won't move much side to side. We'll talk more about the gears a bit later. Also make sure the parking brake is on. It should be up rather than down. We'll talk more about the parking brake a bit later too.


Before starting the car. 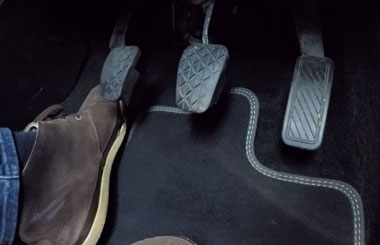 For safety, make sure the car is in neutral. You can check by moving the gear lever left or right. It should feel springy. If it's in gear then it won't move much side to side. We'll talk more about the gears a bit later. Also make sure that the parking brake is on. It should be up rather than down. We'll talk more about the parking brake a bit later too.

How to start the car.

1. Hold the clutch all the way down to the floor. In a keyless car just press this start button. If you didn't press the clutch then a modern car won't start.

2. If you're driving a car with a key then turn the key normally just one click until the dashboard warning lights come on. Don't worry though, at the moment it's normal that they're on. The ignition is on so the electrics are now working. Things like music and electric windows now work.

How to move off and stop. 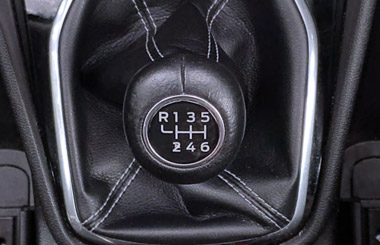 1. Press the clutch fully down (pedal on the left) and select 1st gear. Whenever you need to change gear, always fully press the clutch down to the floor.

To select 1st, you need to follow this diagram on top of the gear lever.

The letter 'R' is for reverse gear and it can be in a different place depending on the car. To select reverse you sometimes have to lift a metal collar. Memorise this diagram in your car and remember where the gears are positioned because it's distracting to look down at it while you're driving.

At the moment it's in neutral which means it's not in any gear. To select 1st gear, push it to the left and then forward to 1st. 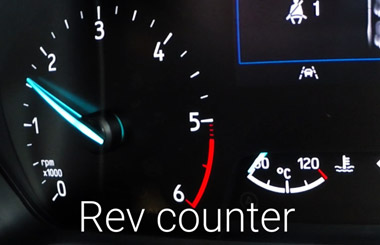 2. You now need to set the gas (pedal on the right). It's a sensitive pedal and you only need to press it slightly about the thickness of a pound coin to get the revs between 1 and 1 and a half but you don't need to be precise (the rev counter is shown in the image). You might overdo it at first but you'll get used to it and it doesn't have to be precise. This will help the car move off without stalling. You would need to give it a bit more gas if you was moving off uphill or no gas if you're moving off downhill. You will get used to the sound of the engine which means that you won't have to look at the rev counter.

3. Now slowly raise the clutch to the biting point. You know when you've found the biting point as you'll feel the back of the car dip slightly, the front raises slightly too and the engine sound changes then keep your foot still.

The first part of raising the clutch doesn't do anything but then you'll feel the back dip a little. The biting point is the car wanting to go forward and the only thing holding it back is the parking brake. You can get different amounts of biting point. If you raise the clutch more, then the car will really want to go a bit too much and it can overpower the parking brake, move off quickly or stall. You only want to feel the back of the car dip a little. Lower the clutch down slightly if it does try and move off too much or push the clutch all the way down and start again for the practice.

When you feel the biting point, you can rest the heel of your foot on the floor as it can help you have more control.

Get used to where the biting point is in your car as it can vary from car to car.


Is it safe to move off? 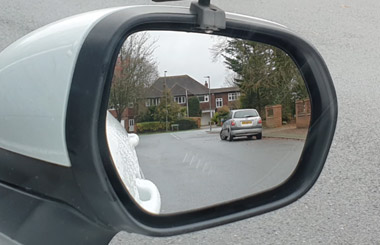 1. It's important to make sure it's safe before moving off by checking all the mirrors and blind spot over your right shoulder.

2. Signal if it would benefit anyone.

The car should now start moving forward. It's important to keep your feet still for a couple of seconds as the car begins to move until you're moving faster than a walking pace and then slowly raise the clutch with a little more gas. The car could stall if you raise the clutch too soon.

If it's unsafe to go and you have to wait then don't hold the biting point unnecessarily as you don't want to increase wear on the clutch. Instead, come off the gas pedal and press the clutch back down.

4. You can release the gas pedal to slow down or press it slightly to increase speed. The gas pedal is so sensitive.

Pressing the footbrake will also slow the car down.

How to pull up on the left. 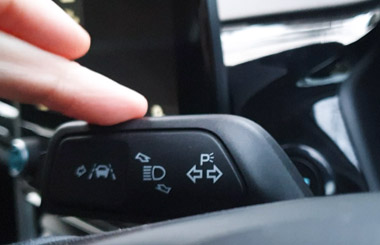 1. Look for a safe, convenient and legal place to park.

2. Check the mirrors to make sure it's safe (interior mirror and then left hand mirror).

3. Signal if it benefits anyone.

4. Release the gas pedal and have your feet ready with the brake and clutch. 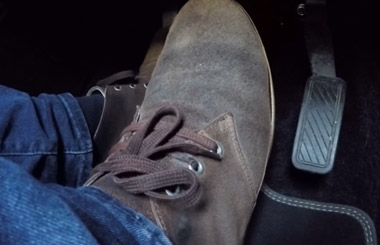 5. Press the clutch as you steer left into a parked position and gently brake to stop.

6. Keeping both feet on the brake and clutch. Parking brake on by pressing the button, pulling it up and then releasing the button. The parking brake should hold the car and prevent it from rolling away. Select neutral by moving the gear lever down slightly so it springs to this central position. If you don't select neutral and release the clutch then the car will jerk forward and stall.

7. Now you can release the pedals and cancel the signal if it's been on.

And that's how you move off and stop in a manual car.

It's highly recommended that you practice all of this with a qualified driving instructor.